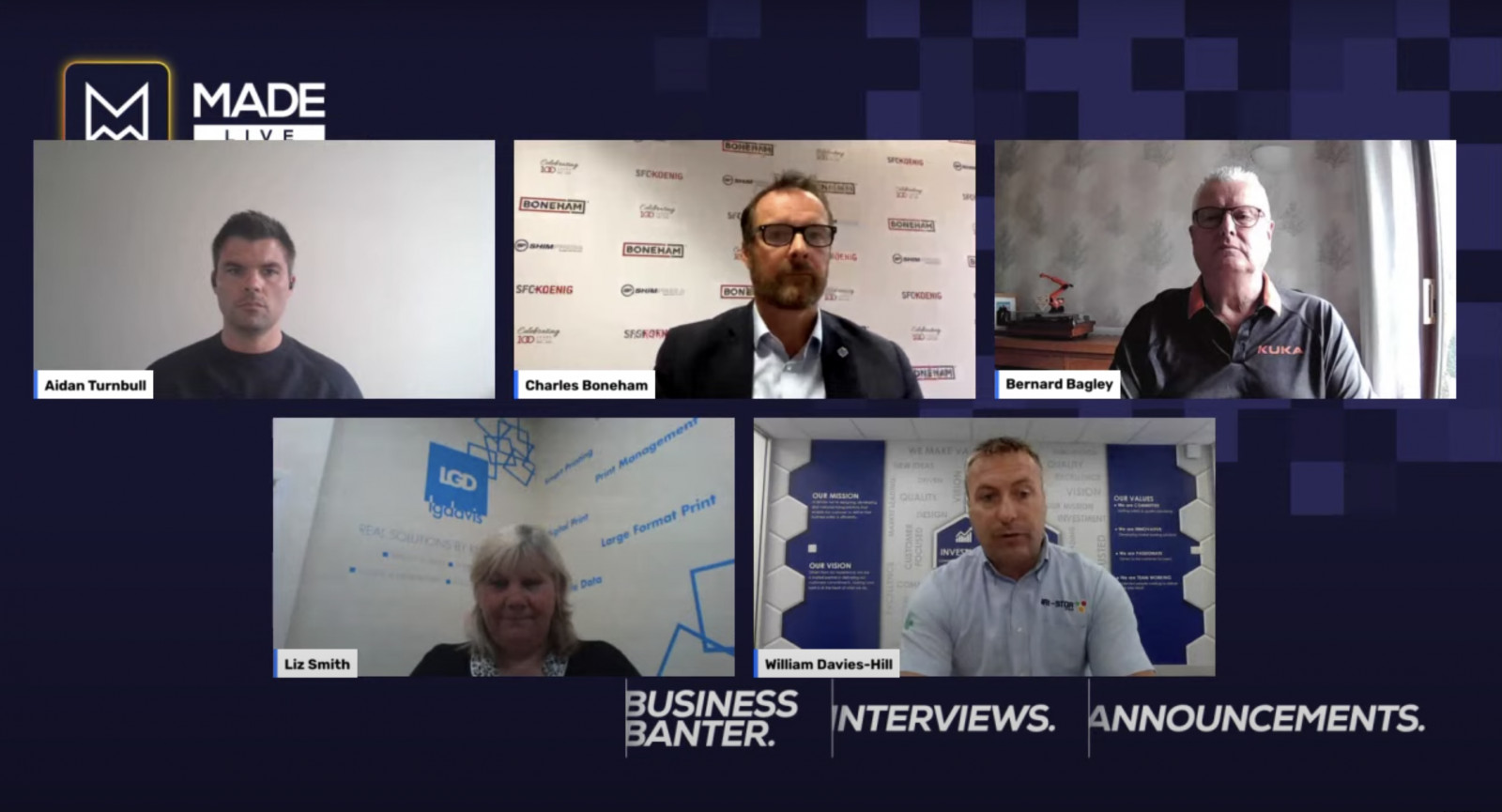 For this instalment of Made in Group’s “The Editor’s Pick”, hosted on Wednesday 1st September at 12pm, Boneham & Turner Managing Director Charles Boneham was selected as the guest editor.

Charles kicked off the live segment, which is streamed across all Made in Group social channels every 1st and 3rd Wednesday of the month to the group’s 30K+ followers, by introducing himself and the event’s guests.

As Editor, Charles had the opportunity to select 3 recent featured articles from the Made in the Midlands platform and spoke directly with the members who published them.

The Potential for Growth and Job Creation Through Automation

First up was Bernard, KUKA, to discuss their article “KUKA: Our commitment to British and Irish manufacturing”. Charles asked “Why is Britain and Ireland such an important market for KUKA Robotics?”

Bernard emphasised that for KUKA, there’s great potential for further growth in the UK and Ireland. The decision to pursue growth in Ireland in particular was taken way back in 2007, with KUKA growing year on year, something which Bernard can “only see continuing”.

The real key here is the advent of easy to program robotics coming onto the market in 2010, which has opened up more opportunities for growth for the likes of SMEs, said Bernard.

“Over the next decade, do you think robots will help create or cut jobs in the UK?” asked Charles. In response to this, Bernard suggested that automation would actually create jobs. Bernard’s reasons behind this largely lied in that automation allows for businesses to thrive and grow - and therefore have more resources for creating jobs - a point which Charles agreed with.

The Importance of Closing the Skill Gap for UK Industry

William Davis-Hill was next to speak to Charles, regarding the article “Bri-Stor Group launches higher apprenticeship scheme in bid to increase 500-strong workforce”.

The 500-strong group, which is based in Hixon near Stafford, has taken on at least 13 engineering apprentices every year for the last 11 years. Now it is looking to expand the scheme with the recruitment of a number of higher, Level 3 and 4 apprentices across a variety of roles.

However, William quickly highlighted to Charles that, this year alone, the group have actually taken on 23 apprentices. A large motivation for this is a strong desire to close the skill gap which exists in the market, which for William partly lies in that not enough young people are encouraged through the education system to go into engineering, for one reason or another.

“It is essential that we take on apprentices to future proof the business” said William, which Bri-Stor are doing in a variety of job roles, including marketing, IT, sales and more.

Ultimately, William highlighted that - with his business having seen all of their current MDs come through an apprentice scheme - “Apprenticeships really know no bounds!”

The Secret Behind 6 Decades of Longevity

Liz Smith, MD from LG Davis, next spoke to Charles regarding their article titled “Birmingham printing specialist expands its reach as it acquires local firm to add to its portfolio”.

Liz’s company has recently looked to further expand into the commercial print and office world with the acquisition of local printers Positive Print, in Kings Norton. Liz highlighted to Charles that, this acquisition will bring many benefits for the company, including the potential for increased capability, expanded regional customer base across Midlands and beyond, and 2 new experienced members of staff having recently been brought in.

With LG Davis having operated for over 6 decades, Charles was keen to find out what best practices have led to this longevity at the company? Liz emphasised that this success came through a variety of things, including: putting customers first, looking to provide bespoke solutions (not just a “one stop solution”), the strong desire to be innovative and not being content to stand still.

Liz also highlighted that the company’s diverse customer base over these years has helped greatly, as it allows them to hone their skills whilst also developing new ones. For example, the company has worked with the NHS for over 20 years, and is now the preferred suppliers to many trusts across the country.

The Value of Self-Discipline and Courage

Prima Electronic Services Ltd has been recently awarded Silver in the UK Defence Employer Recognition Scheme, which demonstrates their commitment to the Armed Forces.

Prima ultimately recognises the importance of supporting our Reservists, providing the time and space they require while cultivating the valuable transferable skills our Veterans bring to the business. The company's aim is said to be to further develop our support to the Armed Forces by strengthening links to the various regional networks through their Armed Forces Champion.

As someone who has served in the armed forced for many years himself, Aidan was candid in revealing how he did feel some fear when leaving in that he may not possess all of the vocational skills needed to succeed in business. However, Aidan emphasised that he believes many of the skills he has learned has standed him in a great position for thriving within the business world, for example the likes of self-discipline and courage.